St. Pauli vs Kiel; both northern clubs are still not sure after three laps where their route leads. While Holstein Kiel has at least four points on the account since last weekend and can take a breather, the FC St. Pauli is already under pressure with only one counter and far behind in the 2nd Bundesliga.

56 times there have been this Nordduell so far. With 23 wins, St. Pauli has a slightly better record. Kiel brings in 16 draws only 17 successes. On St. Pauli the storks even get only two wins with 13 draws and 13 defeats.

Even during the preparation, staff problems at FC St. Pauli became apparent, which led to very clear words from coach Jos Luhukay. Nevertheless, the squad does not seem to be complete even shortly before transfer. Other transfers will certainly be considered because the start did not turn out as hoped. If the 1-1 draw at Arminia Bielefeld despite the late compensation was still a positive result, so was the subsequent 1: 3 home defeat against SpVgg Greuther Fürth a bitter disappointment dar. In the DFB Cup succeeded after VfB Lübeck Although the Moving into the second round, but after a shaky 120 minutes only after penalties. At the VfB Stuttgart, the Kiezkicker presented themselves better last weekend, but ultimately put it a 1: 2 defeat, again including a last-minute goal as in Bielefeld.

Furthermore, the list of outages is long. Henk Veerman, Philipp Ziereis, Luis Coordes, Boris Tashchy, Leo Östigard, Ih-yeong Park and captain Christopher Avevor are certainly not available against Kiel either. Meanwhile, Johannes Flum, Rico Benatelli and Luca Zander, who are now training with the team again in the second week, are hoping for at least one place on the pitch.

At Holstein Kiel skepticism was justified before the start of the season. Because of the last five test matches, the storks, who have lost some regulars and coach Tim Walter again in the summer, could win none of three draws and two defeats. On Matchday 1, the Sieglosserie continued. Against the SV Sandhausen Kiel did not come out over a disappointing 1: 1. Subsequently, the team of the come in summer coach Andre Schubert lost at SV Darmstadt 98 with 0: 2. Only in the DFB Cup Kiel got a first sense of achievement and moved easily with a 6-0 at FSV Salmrohr in the second round. The sturgeon picked up in the cup took the storks into the league and drove last Sunday against the Karlsruher SC (2: 1) the hoped-for first three.

It will not necessarily be left to coach Schubert in the three-pointer against the KSC. A return to the back four would be a bit more likely. Meanwhile, it is certain that Jonas Meffert is missing after his dismissal. Yann Aurel Bisseck and Jannick Dehm are not present due to injury.

Our Best Betting Tips and Predictions

Kiel has a positive trend after two wins in a row and won both direct matches last season. It is quite possible that the storks will once again catch a long-lost FC St. Pauli on the wrong foot. Our best odds: 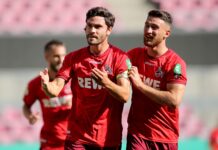